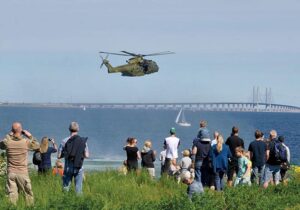 A tradition from the time of the fort was military territory and only opened this one day a year has continued and attracts a great many people. Here is everything that can excite big and small. Huge rescue vehicles from the airport, fire trucks from the Dragør fire brigade and beautiful police cars and motorbikes from the Copenhagen police. There is the possibility of coming in a smoke chamber and Mege Duck.  It is also often managed to get a rescue helicopter to give a display in a rescue operation in front of the fort, and afterwards land on the pasture in front of the fort. In recent years, Lions have done something extra for the children. There has been an overall package of experiences for children, where they both come on treasure hunt, pulling in the Tomball, where there are many good prizes for the children, the cream-throwing will of course also be there and of course there is also an ice cream included. For adults, the large tent and barbecue, pancakes and coffee can be bought right by the fleet, where there is also a bar. Source: https://dragoer.lions.dk/navy_day_paa_fortet